Mulch-a great addition to the garden but only if it is weed free. 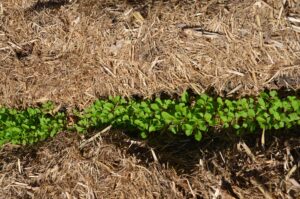 I use mulch everywhere in the garden. In the vegetable garden, the orchard, the cutting garden and ornamental areas.

What is mulch- It is anything that covers the soil and excludes light. It is usually some form of organic matter, but it can also be inorganic, such as stones or pebbles. Stones are only suitable for permanent easy-care gardens, for annual plantings such as in the vegetable garden I like to use an organic matter that will break down quickly.

Why do I use mulch?
 It adds organic matter which keeps the soil full of life and nice and healthy. All organic matter will break down to release nutrients into the soil and increase the humus content of a soil.

 It retains moisture by creating a barrier to evaporation. You must make sure the area is moist before putting it down so water well or apply after good soaking rain.

 It acts as insulation blanket keeping soil cooler in summer and warmer in winter- though in a cool climate it can prevent soil warming up in spring which can delay spring planting. But this is easily overcome by scaping it back for a few weeks at the end of winter exposing the soil to a few weeks of warm weather and then planting up and replacing the mulch.

 But my main reason for using mulch is to prevent weed germination. Both weed seed in the ground or stray weeds that either fly in or are dropped by birds and animals. Mulching will not prevent the growth of persistent weeds like oxalis and onion weed or runner grasses like couch and Kikuyu

Weeding any type of garden can be soul destroying activity and can consume a lot of time that is better utilised planting, harvesting and eating your produce.

Weeds are designed to germinate, grow quickly and stabilise any bare ground- it is natures way of preventing soil erosion. So, if you have exposed soil it will soon be overrun with weeds.

The secret to weed control is to never leave soil bare and exposed.
Always cover it with mulch or groundcover plants.

In any type of planting there will always be some gaps, as all plants need room to grow and mature. By applying a layer of mulch to the area around all plants you will be coving up any bare ground which will cut out light to weed seeds in the soil and stop seeds that land on top of the mulch from accessing the soil thus preventing them from germinating.

You need to apply your mulch at least 10cm thick for this to occur.

One of the greatest disappointment I can have is to purchase and apply a mulch that is full of weed seed.

In the past this seemed to occur regularly when I was buying Lucerne hay or straw and the dreaded pea mulch that would have hundreds of field peas germinate in it. Now both Lucerne and pea mulch, being legumes, add nitrogen to the soil and create a lovely humusy soil very quickly. Field peas germinating in your vegetable garden can also be a good companion plant, but they just grow very quickly and tend to smother anything they are planted with, it’s a shame they can’t be eaten.

I have certainly introduced some horribly aggressive weeds by using these products, some I am still fighting 20 years on. As a result, I am very cautious about buying them.

When I started using sugar cane mulch in the annual vegetable garden I discovered that I have had very little, if any, weed issues with it. As a result, it is my go-to mulch for all annual plantings.

I did however have a lapse in conviction (or perhaps it was my tight valve) when I came across some bales of cheap pea mulch which the vendor said would not grow peas because it has been cut up finely – great I say and purchase 10 bales- it was cheap.

So, you can imagine my disappointment when a couple weeks after applying it the entire bed is full of germinating seeds, Ryegrass, wheat seed and several other things I do not recognise. These are all growing at an alarming rate and even though the chooks are loving them I still must take the time and effort to remove them from the beds so they do not out compete my vegetables. No peas seeds germinated, so the vendor was being truthful, but I expect it was cheap due to weed issue.

In the orchard and ornamental garden, I use wood chip mostly from tree loppers who are doing tree pruning in the area. It mostly contains mixed tree waste consisting of native eucalyptus wattles and the occasional conifer. However, a few years ago I got a load that was full of chopped up willow. Willows have what are referred to as preformed roots under the bark so every piece small piece of willow, and there were thousands, grew roots and started growing. I am still pulling out rouge willows that have taken root all over the garden.

So my advice to all time-poor gardeners or those of you that would rather spend your time doing growing plants than removing weeds is to be cautious of any organic matter you bring into your garden. Find a mulch that is weed free and stick to it.
Much is a wonderful addition to any garden saving you time and allowing you to put your efforts into more productive pursuits but only if it is weed free.

Mulch-a great addition to the garden but only if it is weed free.