Why is a red tomato red? 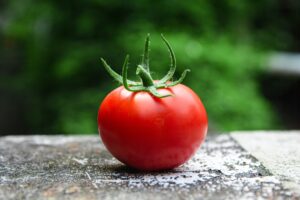 Why is a red tomato red? And much more.
Tomatoes are not just red, they can be almost white or green, maroon, indigo, purple, brown, yellow, orange and red (or combinations of these). Their colour is determined by a combination of skin colour and flesh colour. Skins can be yellow or colourless, while the flesh can be all the colours above.

Red: The classic scarlet red tomatoes have red flesh with yellow skin over the top. The red pigment is derived from the phytochemical antioxidant lycopene, and during ripening there is a 500-fold increase in the level of lycopene within fruits. But lycopene production is reduced once the air temperature rises above 32ºC, so fruits may be paler in hot weather.  Red tomatoes contain large amounts of lycopene and lesser amounts of beta-carotene.
Examples of red tomatoes include Amish Paste, Australian Red, Early Annie, Grosse Lisse, Moneymaker, Red Fig and Tommy Toe.

Pink: These tomatoes have red flesh with white skin. There are fewer pink tomatoes because white skin is a recessive characteristic. Although pink is the description used, the colour often ranges through different shades of pink to crimson. These tomatoes are high in the antioxidant lycopene when ripe, and they also contain beta-carotene.
Examples of pink tomatoes include Anna Russian, Brandywine Pink, Eva Purple Ball, Pink Ping Pong, Ponderosa Pink and Thai Pink Egg.

Orange: These vary from pale yellow-orange to butternut pumpkin orange. They have less lycopene than other tomatoes but are high in beta-carotene and also contain prolycopene. There are also some orange tomatoes that are orange because of a different form of lycopene, known as cis-lycopene. This lycopene is 8 times more absorbable than the lycopene (it’s a trans-lycopene) that makes red tomatoes red.
Examples of orange tomatoes with high beta-carotene include Jaune Flamme, Kellogg’s Breakfast, Orange Banana and Verna Orange. Examples of orange tomatoes with cis-lycopene include Small Sweet Orange, Alice Brewer and Tangella

Yellow: Tomatoes with clear skins range from bright lemon yellow all the way through to pale ivory, while yellow tomatoes with yellow skins can be soft to butter yellow. When cut, the flesh is often paler in colour than the skin. Many yellow tomatoes with either colourless or yellow skin become more orange as they ripen. Yellow tomatoes have less lycopene than red varieties, but they have other carotenoids such as delta-carotene and lutein.
Examples of yellow tomatoes include Azoychka, Banana Legs, Banksia Queen, Barry’s Crazy Cherry, Limmony, Tasmanian Yellow and Yellow Pear.

White: Some tomatoes are so pale that they seem to be white, especially when not fully ripe. The flesh is almost white, and the skin is clear. They turn pale yellow when completely ripe. These tomatoes are generally delicate and mild in flavour.
Examples of white tomatoes include Snow White and White Beauty.

Green: Tomatoes with green flesh when ripe can have either yellow or clear skin. Green tomatoes with yellow skin will usually turn a rich yellow when ripe, but when cut the flesh is disconcertingly bright green. Those with clear skins will remain green when ripe; as the colour change indicating ripeness is very subtle, the fruits need to be gently squeezed in order to detect the slight ‘give’ of a ripe fruit. Green in tomatoes comes from chlorophyll.
Examples of green tomatoes include Aunt Ruby’s German Green, Evergreen, Green Grape and Moldovan Green.

Purple and Brown: These tomatoes have a green flesh gene, which prevents the chlorophyll breakdown that would usually happen in ripening tomatoes. This results in the formation of a brown compound known as pheophytin. When this compound combines with the pink or red of lycopene, you get a brown- or purple-coloured tomato, depending on the skin colour. The combination of lycopene, pheophytin, less beta-carotene and some chlorophyll provides a range of colours. When these tomatoes have clear skin, the colour looks purple; when the skin is yellow, the colour is perceived as maroon/brown. Flesh colour is substantially purple/brown with a greenish pigment, especially in the gel that surrounds the seeds. Many of these tomatoes confusingly have ‘black’ in their names, when they are really not at all black, either in the skin or flesh.
Examples of purple tomatoes include Black Cherry, Black from Tula, Black Krim, Cherokee Purple and Purple Calabash. Examples of brown tomatoes include Black Plum, Black Russian and Japanese Black Trifele.

Blue/black/indigo: These tomatoes started with Indigo Rose, which gets its indigo/black/ blue colour from anthocyanin in the skin. Since the development of this tomato in 2011, many other blue/black tomatoes have been bred by crossing with either this tomato or varieties that were derived from the first cross. The area of blue/indigo skin is determined by how much sunlight hits the tomato as it develops. Usually the anthocyanin is only in the skin, but sometimes it can occur in the flesh just below the skin. The flesh can be green, yellow, pink, orange or red. Anthocyanin is essentially tasteless, so it doesn’t add to the flavour profile.
Examples of blue/black/indigo tomatoes include Blue Beauty, Blue Berries, Green and Black, Red and Black.

Why is a red tomato red?