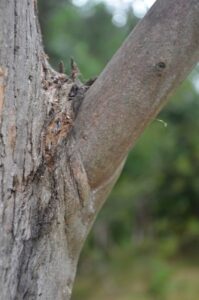 Pruning is the process of removing parts of a plant for health reasons or to encourage certain types of growth.

Not all food bearing plants require pruning, whereas some species benefit greatly if pruned correctly and pruning requirements are often specific to the species.

The need to do any sort of pruning should be well considered, before the commencement of pruning, as all wounds have the potential to leave a plant susceptible to pest and disease infestation. There has to be a net benefit in doing the pruning, either for the plant or for you as the harvester.

It is important to understand the pruning requirements of each of your fruiting plants.

You can read my other posts on Pruning: Equipment Needed and Pruning cool climate fruit trees here.

Branch collar—A raised area of tissue at the base of every branch. It contains specialized cells that seal off pruning wounds to protect the plant from disease. Always prune to, but not into, the branch collar.

Bud- an undeveloped or embryonic shoot and normally occurs in the axil of a leaf or at the tip of a stem. Can be a fruiting bud (flower) or leaf bud. Bud or graft union-The union of the rootstock and scion variety. Crotch angle—The angle formed between the trunk and a limb. The strongest crotch angle is 45 to 60 degrees.

Crown—The base of the trunk where the tree meets the soil.

Heading (or head cut)—A pruning cut that removes only part of a branch.

Lateral branch—A side shoot off another branch, usually at a more horizontal angle.

Shoot—The length of branch growth in one season. The bud scale scars (ring of small ridges) on a branch mark the start of a season’s growth.

Stub—A short portion of a branch left after a pruning cut. Avoid leaving stubs when pruning as they die and can leave the plant susceptible to disease.

Sucker—A lateral growth that is growing from below the bud or graft union or from the roots. Rootstock- The plant on which the selected variety of fruit has been budded or grafted on to.

Terminal—The end of any shoot. Thinning cut—A pruning cut that removes an entire branch from its point of origin.

Trunk- The main or supporting butt of the tree. Formative or structural pruning.
This is pruning that is carried out on young plants that encourages a strong framework of branches that:

To limit plant height and width.
This may be done for several reasons:

To control the direction of growth or shape.
Again, so it will fit into a particular space or to create a particular type of plant structure such as espalier.

To improve air circulation.
This is usually achieved by removing some branches, particularly those in the centre of a plant, to help increase airflow through a plant to decrease the chance of fungal diseases, such as brown rot in peaches.

Increase light penetration
Again, the removal of branches from the centre of a plant to increase the amount of light reaching all foliage and fruit which will ultimately improve fruit ripening and colour.

Increase the amount of fruit-bearing wood.
In Pome fruits (apples and pears) which produces fruit on spurs or two-year-old wood, by cutting back young vegetative growth in summer you will encourage the plants to put energy into spurs or fruit-bearing wood. Whereas in stone fruits, which bear fruit on last years new growth, then pruning during winter or after harvest encourages new growth during the growing season which will produce fruit the following year.

Decrease the amount of fruit-bearing wood.
Too much fruit will cause fruit to be small and can cause damage to trees through limb breakage from excess weight as the fruit matures. Removal of some fruit-bearing wood will protect the tree and improve fruit size and quality.

Removal of water sprouts
Water sprouts are vigorously growing upright shoots arising from above the graft union on grafted trees. In some cases, water sprouts can be trained to form strong branches and can be beneficial. However, if they are creating crowding, have narrow crotch angles, are crossing or rubbing, or are causing poor branch or tree structure, they should be removed.

Removal of suckers
Most deciduous fruit trees are grafted on to seedlings of an undesired variety. All growth arising from below the graft union or from the root system should be removed. If not, the rootstock, which is much more vigorous, will become establishing and dominant eventually killing the desired, grafted variety.

Structural pruning should occur when the plant is young. The smaller the branch, the smaller the wound and the less energy required to heal it.

Structural pruning ensures that a strong framework of branches is produced on a tree that enables it to carry crop loads and prevents damage to trees. Aim for four or five main limbs, with secondary limbs arising from these.

The most common shapes are vase (stone fruits) or pyramidal (pome fruits). In my experience, using a vase shape for all fruit trees enables you to maintain a plant’s height and openness. Major structural or rejuvenation pruning of mature trees should occur when the plant is actively growing, but beware of the risk of sunburn damage. Complete on an overcast day and when excessive heat is not forecast for several days.

The reasons for this were:

However, it is becoming common practice to summer prune, as it is more beneficial to some species as it promotes faster healing of pruning cuts and reduces the incidence of fungal and bacterial infections.

Pruning times will vary with each fruit plant you have. See links below to other blogs for some basic information on specific  fruiting varieties. Otherwise do the research and find out when it is the best time to prune your specific plants for the results you want.

Pruning: How to Prune

Ensure your secateurs blade is against the part of the plant not being removed, this ensures a clean non crushed wound.

Large Limbs: When large branches need to be removed, it is important to use the three-cut method.

·       B. Make a second cut from above, several inches along form cut A and allow the limb to fall.

·       C. Complete the job with a final cut just outside the branch collar.

To ensure you are familiar with your fruiting plants pruning requirements consult a reputable source for specifics concerning when and how to prune a particular plant.

It is essential you know what type of wood will bear fruit.

Link to my blog on equipment needed for pruning:

Link to my blog on  basic  pruning requirement for different species: